On the wall behind Fran Fleck’s home office desk in Des Moines, Iowa, hangs a quote by the late Supreme Court Justice Ruth Bader Ginsberg: “If a woman is short, bend down and listen to her.”

At 4 feet 11 inches, Fleck jokes that when she started lobbying, she was six-one. “Being beaten down all those years, I just got shorter and shorter.”

Fleck has had experience as a lobbyist/liaison in environmental, education and small business sectors…

In a 23-year stretch of advocacy, Fleck tied off her professional career as an executive director at Iowa’s Wholesale Beer Distributors Association before she and her husband bought County Bank, Sigourney, Iowa, in 1999. Now, she’s on the board of the Community Bankers of Iowa — the first board member to join as a bank’s director, not an active banker. The association reached out to her, she said, in part due to her legislative connections. Fleck is being honored as one of BankBeat magazine’s 2021 Amazing Outside Directors.

“What we found out is if you know association management, and you know legislation, and you know the different levels of government, then you can move between subject matters,” Fleck said. “You can always learn the subject once you get into it.” 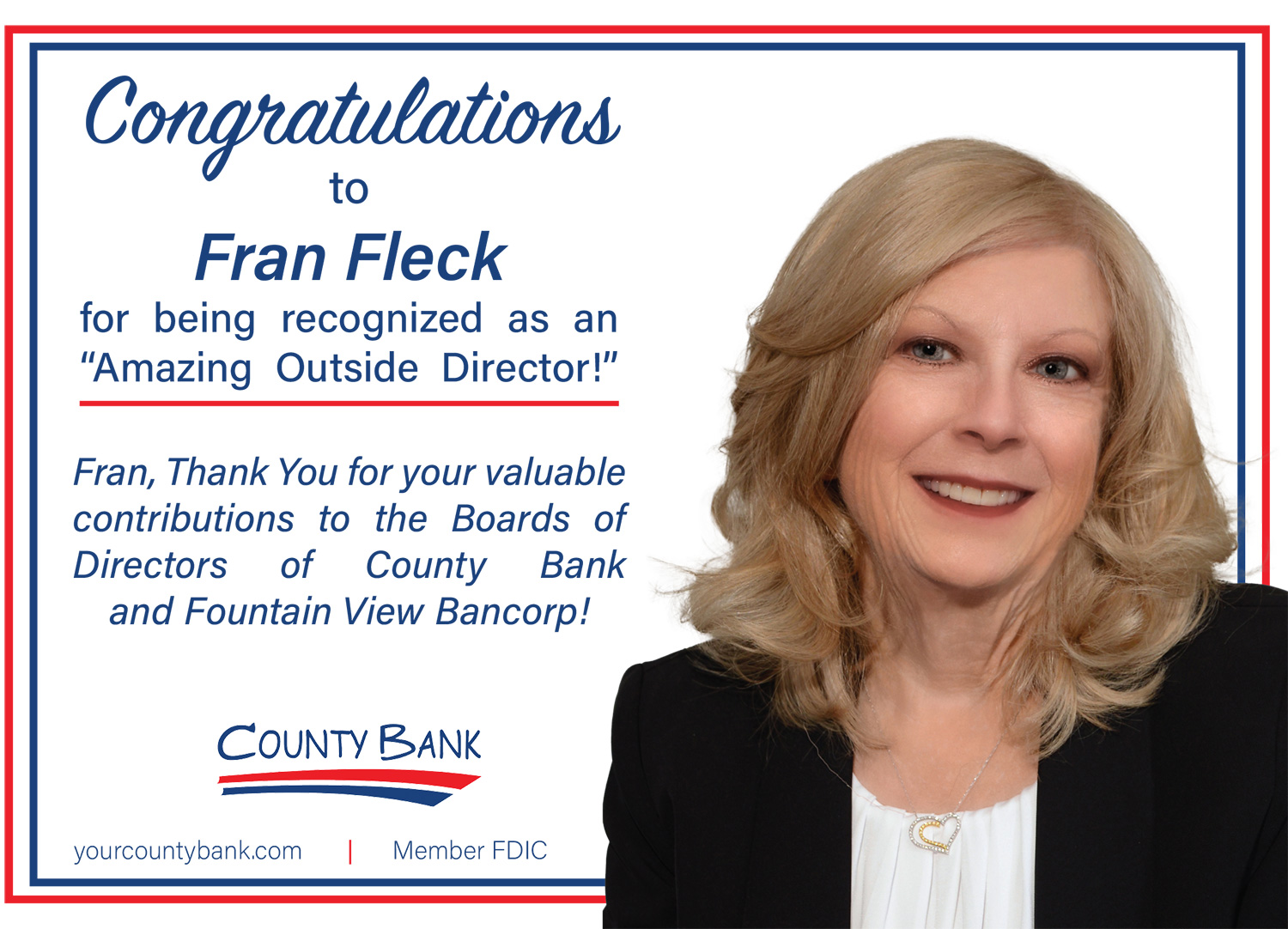 Fleck was raised valuing public service and education. Her parents had what she described as jobs rather than careers, though they always spent their off-hours giving back and paying it forward. Her Jewish father left Austria for the United States in 1938 when Hitler invaded his home country. Her mother came from Canada after World War II. Fleck never questioned whether she’d go to college.

She graduated from the University of Iowa, Iowa City, with an undergraduate degree in elementary education without much intention to, or interest in, becoming an elementary school teacher. It was 1970, and “most of the girls were planning to be nurses or teachers,” Fleck said. “There were not a lot of girls in the business school.”

In a swift pivot to pursue graduate school, she met one professor who helped her make what, at the time, was a courageous transition. “He made me realize that I could do what I was trying to do. I was going out of education into public administration with no background in the area.

“He helped me realize that I could be something.”

The year Fleck graduated from Drake University in Des Moines with a master’s degree in public administration, she became the deputy director of the Iowa Campaign Finance Disclosure Commission. It was the age of Watergate, and Fleck oversaw campaign finance when it was a national focus, as a legislative liaison — the legislative equivalent of a lobbyist.

At the end of the decade, Fleck transitioned to become a legislative lobbyist for the Iowa Association of School Boards. In 1979, she joined the U.S. Environmental Protection Agency in Kansas City, Mo., as an intergovernmental relations specialist, serving as the middleman between the state, local, association and private sectors implementing environmental policy changes. She advocated for small businesses as a liaison at the Iowa Department of Economic Development before shifting to leadership in the state’s beer distribution industry.

Fast forward to 1998, Fleck and her husband, Terry Greenley, to whom she’d been married for just one year, decided to buy County Bank.

Greenley had always been fascinated by banks. One of his businesses involved selling products to banks: Cash tickets, coin wrappers, bill straps, deposit envelopes. He handled the operational side of banking, and Fleck brought in the regulatory expertise. “He did the numbers, and I did the word-smithing,” Fleck said. “We made a good team.”

Since Fleck joined the board in 1999, the bank has gone from $39 million in assets to $200 million, 10 employees to 40, and from one location to six. And for the two decades she and Greenley have been together and run the bank, she has lived in Des Moines, he in Sigourney.

Fleck is an urban person on the board of a rural bank. While she brings her unique and urban perspective to the board, she’s also had to learn how the two banking contexts differ. She contributes what she describes as an already-broad worldview. “They don’t live in a rural bubble,” Fleck said. “They live in a big world too.”

In the past 30 years of nonprofit work, Fleck has tried to mentor two or three people in any organization she’s been with, “so when I walk away, you don’t even notice that I’m gone.” One message Fleck’s graduate school mentor left her with was to never stop learning, never stop being curious or fail to ask the next question.

The up-and coming generation “has a lot to give, and new ways of looking at things,” Fleck said. “We don’t need to teach you how we did it. We need to help you do it your way.”